A Complete Guide On Cryptocurrencies For Dummies

Cryptocurrencies are a type of digital and decentralized form of currency that is used as a medium of performing transactions online based on blockchain. The formal definition is quite complex. Hence, this article will act as a guide on cryptocurrency for dummies, so let us start with what are cryptocurrencies.

As mentioned above, cryptocurrency is a digital form of currency used to perform various transactions.

The formal definition of cryptocurrencies is that they are a limited number of entries in a database that can only be changed under specific conditions. Cryptocurrencies are not owned or governed by a single entity or government (like bitcoin). Instead, they are deployed on a peer to peer network of computers that run certain algorithms to validate such transactions.

These peer to peer networks of devices form a blockchain, once a transaction has been successfully completed it becomes virtually impossible to change the transaction in question.

Satoshi succeeded at what most of the people failed to do, which was the invention of a truly decentralized form of electronic currency. The currency was not owned or governed by any single entity or government in the world. Instead, it was looked over by a peer to peer network of computers running the same algorithm.

How Does Cryptocurrency Work?

At first, all this technical talk of how this works sounds really complicated. But if you take away all of the technical components, it is still the same as our traditional currency.

Traditionally, a payment system with an account, a certain amount of balance, and a transaction are required to make the system work where all of this is overlooked by a central authority/system.

In cryptocurrency, there is no central authority to overlook and verify such transactions. This is done by a network of connected computers that keep the same records in their databases to validate transactions.

The beauty of Satoshi’s system is that the network reaches a consensus among all peers in order to validate a transaction. It was never possible in a decentralized system through the use of cryptocurrency mining.

What Is Cryptocurrency Mining?

The consensus is done in order to tackle the problem of double-spending, which is a fraudulent way of doing the same transaction twice. This consensus is achieved with the help of blockchain technology.

It is done by keeping a  public record of all previous transactions that have occurred over the course of time are kept at every node.

Once a transaction is requested by a user, the signed request is forwarded along with the public keys of both the sender and the recipient along with the number of coins to the miners.

The miners run cryptographic algorithms known as puzzles. Once a puzzle is solved and the transaction is marked valid it is disseminated in the whole network.

How Does Mining Work?

Upon successful transaction, a block is created which contains all the necessary information like the number of coins, public keys of both parties signed by their private keys as well.

These blocks are then merged with thousands of other entries and are then added to a chain, hence the term blockchain is used.

Once an entry is added, it cannot be altered or changed in anyways and is made public for anyone to see, hence the foundation of blockchain is laid upon its three pillars; decentralization, transparency, and immutability.

The miner on the other hand also gains a financial benefit from this. Miners are paid in coins as a fee for their services.

Anyone can be a miner as the system is decentralized. New miners need to allocate their resources in order to produce proof of work. Proof of work is achieved by running an algorithm to generate a hash, which can be used to connect a block to its predecessor.

The miners compete with each other to generate the hash first. And whoever wins is rewarded in the form of coins and that is how new coins in cryptocurrencies are generated.

The first cryptocurrency ever created, Bitcoin has set the standard for today’s cryptocurrency market. This was the brainchild of Satoshi Nakamoto, who started the cryptocurrency revolution. Bitcoin is mostly accepted as the go-to cryptocurrency by a number of vendors. And is also used as a source of payment on the dark web.

Developed by Vitalik Buterin, Ethereum has attained the second place in the cryptocurrency chart. Ethereum is flexible as it can be used as a source of programs and contracts and is not only limited to transactions of sorts.

Ripple is faster as compared to Bitcoin as it does not use the traditional blockchain technology. Instead it uses an iterative consensus process to get a network-wide consensus. This feature makes it faster but also more susceptible to attacks launched by hackers.

Litecoin is a fork of Bitcoin, designed with the idea that it will act as silver against the gold that is Bitcoin. The improved mining algorithm of Litecoin makes it four times faster than Bitcoin. Litecoin is considered as a backup in case Bitcoin fails.

It is also a fork of Bitcoin, Bitcoin cash has soared to the ranks of the top five cryptocurrencies available in the market these days.

Pros And Cons Of Cryptocurrencies

Like everything cryptocurrencies also have some positive and negative aspects. Here is a brief list of the pros and cons of the digital currency that has taken the world by storm.

The future is bright for cryptocurrencies, as they are here to stay. Governments may impose certain rules and regulations on their use in the near future. But the core features like decentralization and irreversibility will stay the same. The uses of crypto coins are increasing day by day and prospects like buying goods, investing, and using them for mining have opened up. 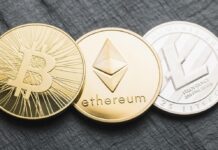 The Different Types of Cryptocurrency Wallets That Exist Today